The Nakagin Capsule Tower, an icon of the metabolic movement

The Nakagin Capsule Tower will soon be dismantled, as no buyer has been found. Built in 1970 in the Shimbashi district of Tokyo, this architectural UFO, recognizable by its cubic modules, is one of the rare achievements of metabolic architecture, whose architect, Kisho Kurokawa, was one of the leaders.

Japan, in the aftermath of the Second World War. The defeated country saw the birth of a generation of architects traumatized by the conflict, seeking to give shape to a true architectural utopia. Inspired by left-wing political ideas, they rejected the post-war development model based on westernization and industrialization. On the contrary, they wanted to give birth to a contemporary architectural language specific to Japanese culture.

Their city or building projects are like organisms that evolve according to their needs and time around megastructures. The Nakagin Capsule Tower, consisting of two reinforced concrete and steel towers, to which 140 capsules are attached with high-strength bolts, is a perfect example of this concept. Each 10m22 module contains a bathroom cabinet, circular window, furniture and built-in appliances. Each is individually anchored to the structure so that it can be replaced without affecting the others. Designed in 1972, the building was supposed to change its capsules every 25 years, but this has never been done due to lack of funds. Some of them will be refurbished before being sent to museums or sold. As for the others, a fundraising campaign has been launched to restore them. A way to give reason to the principles of metabolism, established more than 60 years ago. 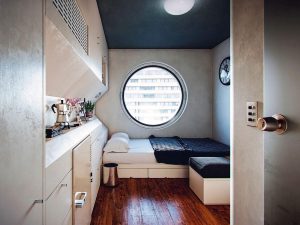