that Have Chosen Galerie Joseph Spaces For Their Exhibitions 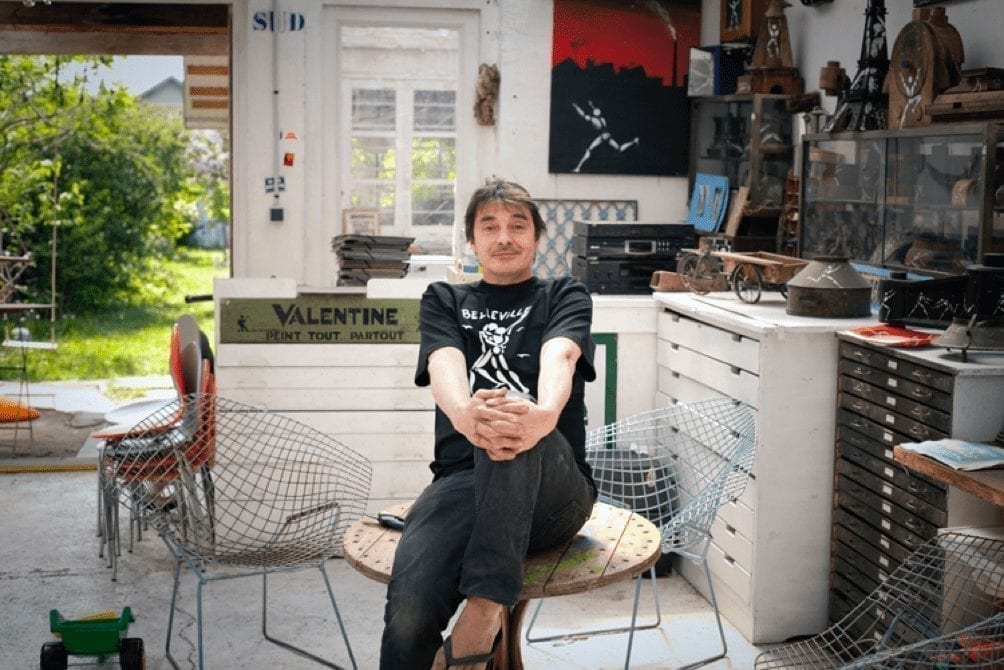 Born in 1961 in Colmar, Jérôme Mesnager is one of the first French street artists. Son of engineer, Jérôme Mesnager studied at Ecole Boulle, located in Paris, and initially trained as a cabinetmaker. In the late 1970s he attended comic books classes with Yves Got and Georges Pichard, both professors at École Duperré, cartoonists for the press and illustrators. He became one of the instigators of the French group Zig-Zag, a collective of several young French urban artists, who began in 1982 to redecorate urban and public spaces in Paris with graffiti, drawing sometimes in performance given in complex disused. JM draws the man in white from 1983, “a symbol of light, strength and peace”. Reproduced all over the world, from the catacombs of Paris to the Chinese walls, through the walls of Togo and the Tokyo streets, this faceless silhouette has been able to impress the minds of passers-by, spectators, and conquer the islanders. -de-France and the twentieth arrondissement. On palisades, nooks, signs; on cement, scrap metal, glass, the artist makes his immaculate characters dance in silent battles. His only goal then seems to offer a little joy and feeling to those who encounter his brushstroke. As he says so well: “I make paintings and the canvas is the world”. 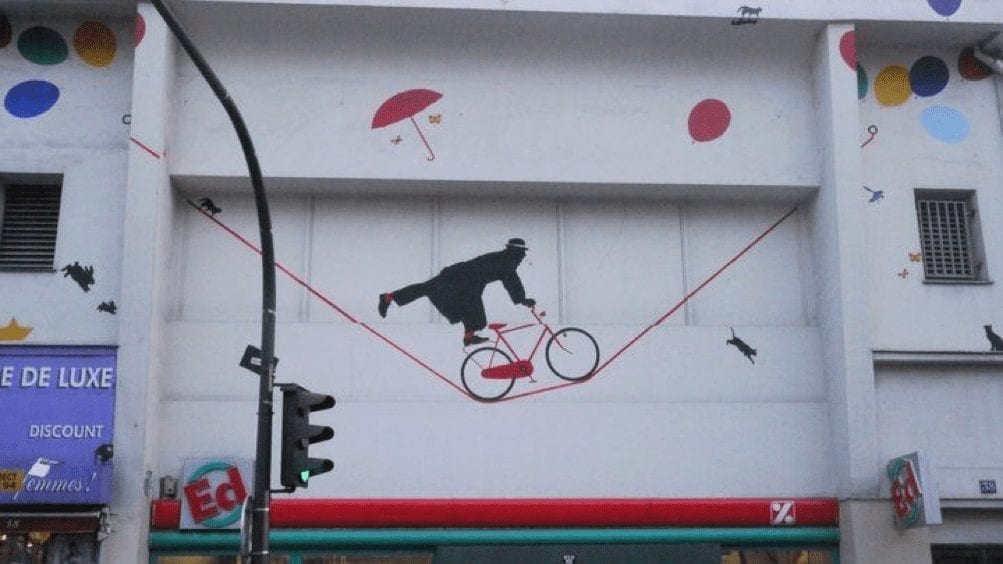 Némo is a French street-artist, stencil artist, and graffiti artist. He draws and paints mainly a man dressed in a long black raincoat and a hat of the same color in the streets of Paris and the twentieth arrondissement, in Belleville or Ménilmontant. We can sometimes see this man in black accompanied by red balloons and umbrellas, or a black cat wandering at his feet. The recurrence of this balloon is reminiscent of Albert Lamorisse’s film “Le Ballon Rouge”, shot in 1956 in eastern Paris. His artist’s name would then refer to Winsor McCay’s early twentieth-century comic book “Little Nemo in Slumberland”. Némo has decided for several years to remain anonymous, but he associates himself from time to time with the urban artist Jérôme Mesnager, whose white silhouettes echo his man dressed in black. 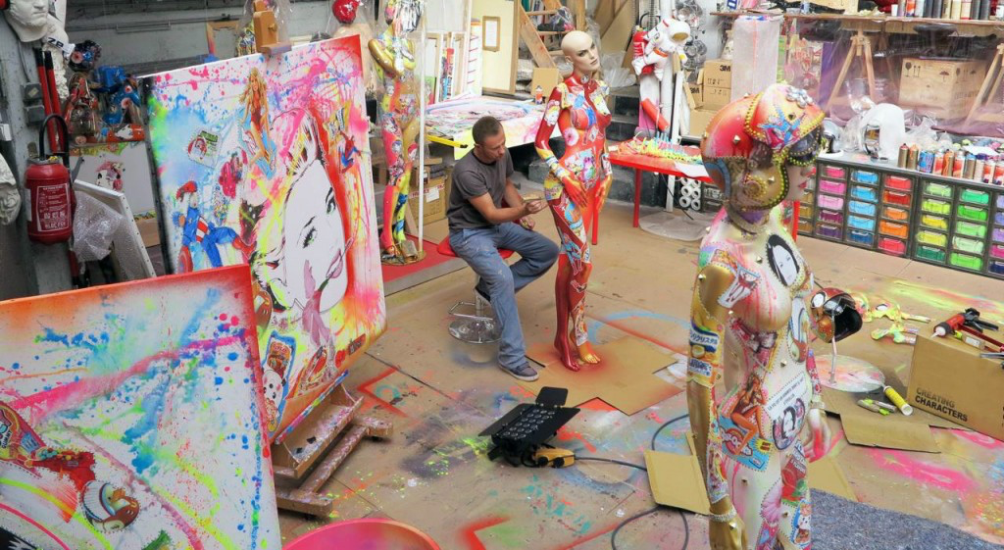 Born in 1970, David Cintract lives in Paris and has been working since 1988. He is a painter, a photographer, a visual artist or a sculptor, but is above all a multi-faceted versatile artist. Juggling between his acrylic bombs, his brushes, maroufling different surfaces, plating jewels and mother of pearl dots … DC draws inspiration from the world around it to build and complete its childish and quirky artistic empire, mixing serious subjects with more futile questions . Whether with its “Candy-Box’s” or “Muntant-Toy’s”, teeming with cultural references drawn from different parts of the globe, DC makes objects manufactured true contemporary jewels. It was by creating his own movement “Free Pop” that he then defined his creative sector, a kind of Pop-Art engaged and explosive in a back-and-forth tragi-comic. His gigantic mannequins are sold worldwide, and his artistically modified animals or other custom cars exhibited at events of international renown: his Fiat 500 Art was presented at the Cannes Film Festival. 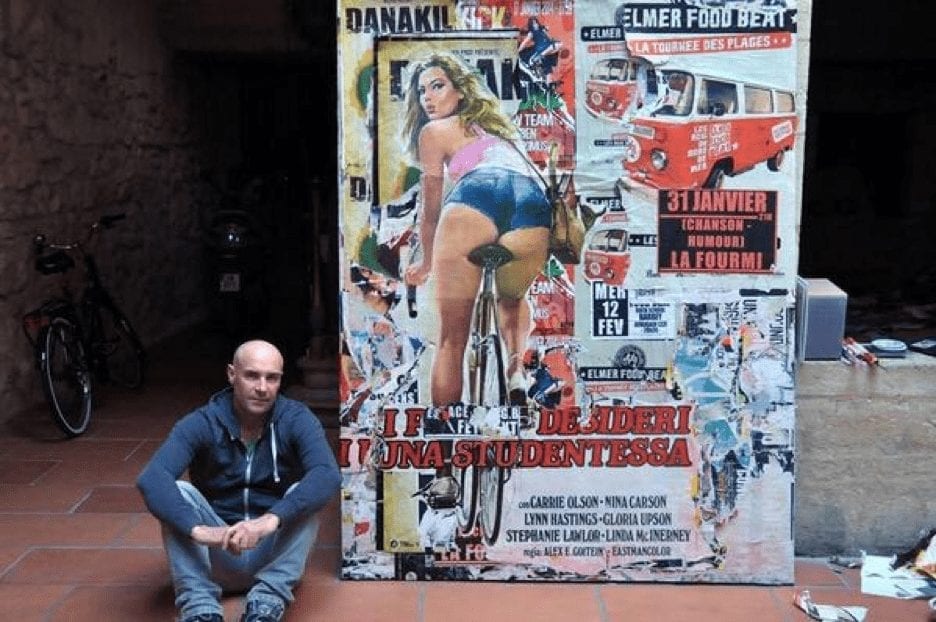 Laurent Durrey is a poster artist born in Bordeaux in 1967. Always searching for new sources of inspiration, he travels around the globe to find new colors, new faces and new textures in order to develop his superimpositions. In the manner of a graphic designer, he defines solid colors of pigments by destroying and damaging the posters he has collected during his expeditions. Because the only material of his work lies on the walls of cities. LD defines himself as a “new realist”: he uses what already exists to transform him. Natural heir to Caesar, Mimmo Rotella or Gerard Deschamps, LD is in the current line and urban new posters. He lives and works in southwestern France. Among the themes that can be found in her universe: the identities, feminine and masculine, that the artist never ceases to question and represent in their social and gender issues. Fatal women, Pin-up revisited with piercing eyes, or lieutenant of police and vigilantes with the easy trigger, LD metamorphoses of the popular icons by fragmenting and recomposing their environments. 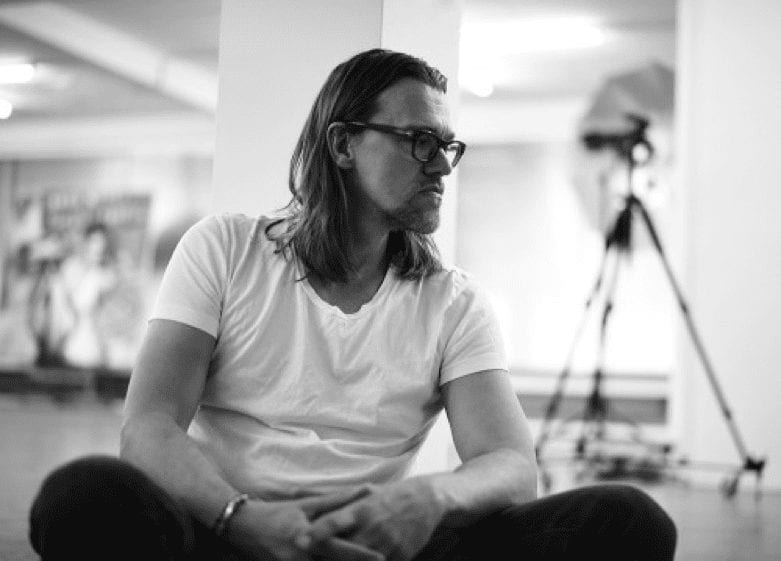 Born in 1965 in the Ruhr basin, Jörg Döring began painting in his youth. At the age of 21, in 1986, he opened his first professional studio in Essen and, from 1988, exhibited some of his works at regional exhibitions. Since 1995, he has been working around Düsseldorf, and his repetitive presence in German art fairs and galleries has earned him an international reputation. He lives and paints today in Meerbusch, near Düsseldorf. Passionate about the United States and its emblematic megalopolis New-York, cradle of Pop-Art, JD is inspired by emblematic figures drawn from different fields: comics, characters from comics, famous revolutionaries, brand images … In the A lineage of Warhol and Lichtenstein, the artist frequently uses show business icons like Marilyn Monroe, Deborah Harry and Steve McQueen to reference his aesthetic universe. He began oil painting in the early 1990s, and today uses mixed media, such as collage, printing or screen printing on canvas. JD is represented by around fifty galleries across Europe, but also in the United States and Canada. His work has been shown in more than 250 exhibitions in Munich, Cologne, Hamburg, Berlin, London, Zurich, Stockholm, Basel, Paris, New Delhi, Los Angeles and Miami. 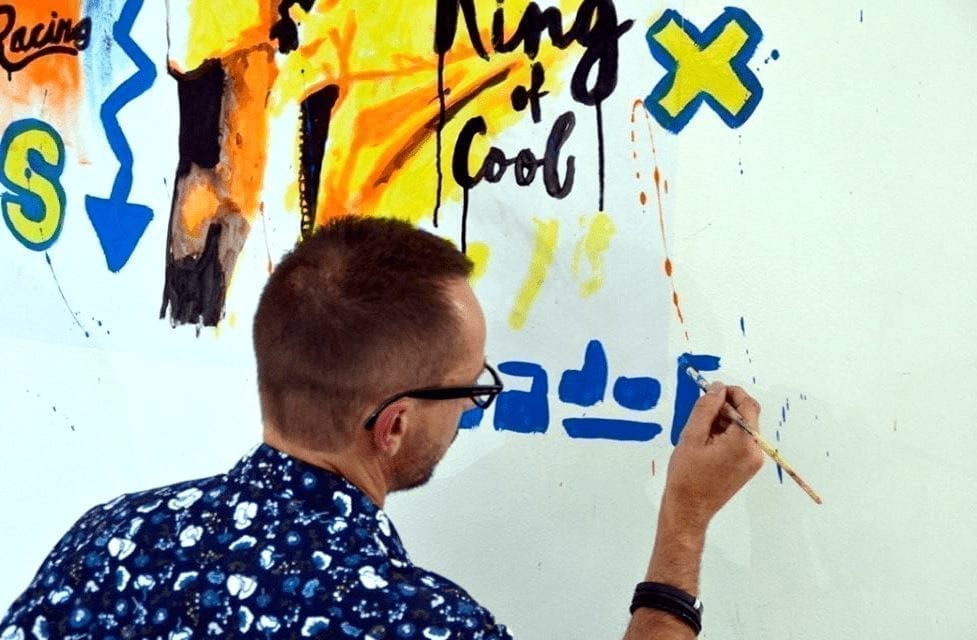 Jean-Sébastien Godfrin alias Argadol, is a French artist born in 1976. His pictorial universe mixes Pop-Art and Street-Art in an explosion of contrasting colors and significant details, reminiscent of graffiti and murals that can sometimes be seen at the corner of an alley. Between acrylic and aerosol bombs, his field of activity ranges from painting to sculpture (made of resin or other materials). It features portraits of celebrities or superheroes already existing, but it reworks to give them a new meaning. His goal is then to negotiate with the viewer to see beyond the initial and conventional image that he has modified, finally delivering a message to positive values. Argadol exposes his work in Europe and the United States. He has collaborated with brands such as Ray-Ban, who recently selected one of his works as a cover for a music compilation. Highly sought after, this former communication and graphic designer has recently decided to devote himself exclusively to his passion for painting. 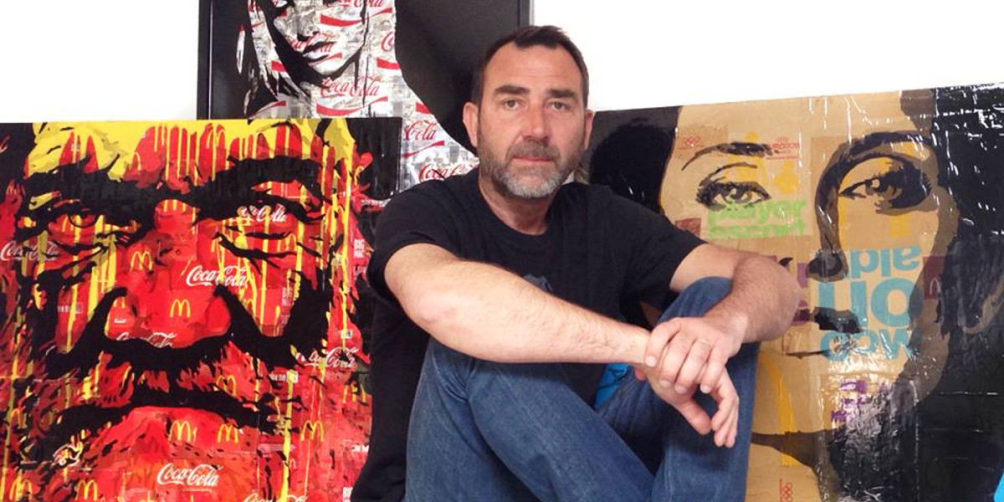 After studying at the École Supérieure des Arts Applied Duperré in Paris, F2B, aka Frédéric de Bonnechose became Artistic Director and Creative Director in advertising agency. He explores in a neo-pop-art of different product brands and commercial symbols that saturate our modern society. It is with different objects (cartons, cans of oils …) as supports that this former communicator expresses himself, staging on the body of naked women or on striking faces logo and slogans recognizable among all. It thus diverts several retail chains: brands of beer, soda, electronic devices, fast food … The connection between femininity and advertising questions our roles as buyers, consumers of ‘Art and spectators face this advertising use of women. His work is oriented exclusively from 2005 on brand logic: his “Brand-Babes” sirens devoted to mass consumption, do not stop talking about them. F2B has recently initiated other works of the same kind, such as its “Buttocks Factory” or the series “Skull & Gun”, inspired by the legendary heroes of Marvel. 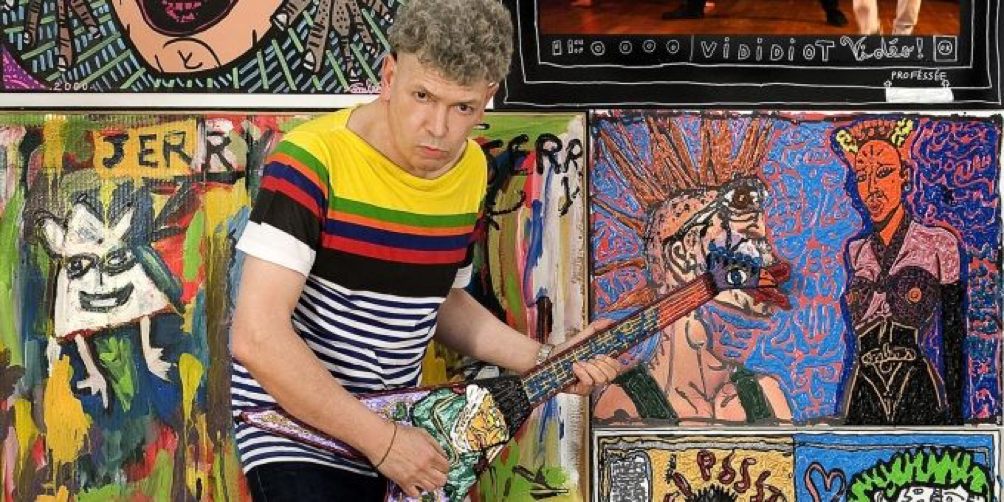 Robert Combas, born May 25, 1957 in Lyon is a French painter, sculptor, illustrator and also musician. He is widely recognized as one of the instigators of the Figuration Libre movement, started in France and mainly in Paris in the late 1970s through the magazine Bato, in reaction to minimalism and conceptual art. The work of Combas has always been strongly rooted in the various representations of the human figure. Painted faces are often in wild, violent and orgiastic environments. In a proliferation of bodies and drawings reminiscent of motifs present in many foreign folklore (we think of its graphic proximity to the East), RC develops its urban poetic universe on large canvas often not stretched. He creates hectic narratives against a backdrop of war, crime, transgression, celebration and sex: all the phases that form the unalterable flow of modern life. In recent years, a strong autobiographical tension is detected in his work. Provocative and close to popular cultures, he draws his inspiration from rock music and all synonymous with freedom. RC appears every year in the list Artprice, a listing company for the art market on the Internet and online art sales, which makes him one of the 500 most famous artists in the world. A major retrospective was devoted to him in 2012 at the MAC de Lyon, and in 2016 at the Grimaldi Forum in Monaco. His works have been exhibited in the last ten years in Seoul, Daejon, Venice, Bratislava, Paris and Milan.

“I glue toys with resins on canvas that I repaint in white to get a new medium, a kind of low relief. I then realize on this embossed surface a figurative painting unrelated to the glued toys by looking for a visual effect that hides the volumes and gives a strange depth to the painting. Once exposed, my paintings need a diffuse lighting to erase the shadows. From 1992 to 2006, I mostly painted urban and colorful scenes. At the same time, from 2002 to 2005, I realized performances in painting: Chalon festival in the street, Avignon, Auto Show 2004 … From 2007 to 2010, although still working on toy collages, I left aside the baroque and colorful universes to refocus on the drawing and the meaning of life, or rather a beginning of the beginning of an attempt to explain. So I created three new series “Planet Village”, “Castle” and “The Great Dwarf Wear What”. From August 2011, I started to reproduce known or little-known images of warriors, riders or portraits, about twenty of which can be seen on my facebook profile: felixugos. At the same time is born the series of “Nanamorphoses”, a company of seduction represented by pin-ups, painted on big toys glued on canvas like a high relief. The result is a kind of anamorphosis, an image that is visible only from one point of view. Since September 2014, I am painting a new series “French Village” very naive with many colors and various characters. I hope to bring joy and good humor. ”

Looking for a GALLERY or SPACE for your exhibition?