The Villa Albertine, a showcase for French culture in the United States

This fall, France will launch the Villa Albertine in New York, with the aim of putting young French artists in touch with American culture. Announced on July 2 by the Quai d’Orsay, the opening of this artistic creation residence is inspired by the prestigious Villa Medici in Rome.

The Villa Albertine is intended to be the future showcase of French culture in the Big Apple. Openingin October 2021, shortly before the residents of the first season move in, it will be an American version of Villa Medici. But unlike the prestigious 16th-century palace in Rome, the US version will be a network in the ten largest cities in the country. Immersed in American society

The ten locations chosen for the creation of the Villa symbolize American diversity and are based on the cultural networks between the two countries, whether in New York, Washington, Boston, Miami, Atlanta and New Orleans, or in Chicago, Houston, Los Angeles and San Francisco. There will eventually be 60 residents, for stays of one to three months and an average cost of 20,000 euros, or a budget of 1.2 million euros per year, co-financed by private sponsors, including the Bettencourt-Schueller Foundation. The villa, whose name refers to one of Proust’s “young girls in bloom,” will offer some fifteen support programs for museum curators, scriptwriters, videogame writers and the promotion of French digital creation in the United States.

With this eclectic project, France is reviving its tradition of artistic residences abroad, such as in Rome, but also in Madrid with the Casa Velázquez, inaugurated in 1928, and Kyoto with the Villa Kujoyama, dating from 1992. The Villa Albertine will thus be a diplomatic tool across the Atlantic. 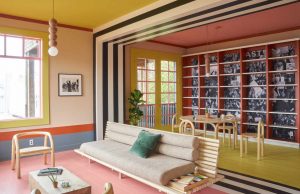