An art exhibition in the Marais celebrating poetry

It is March 12 2020, in the middle of the Marais. During this evening, we can feel that the cold and sad winter is gone thanks to an animated and cheerful Chapon street. In fact, the  Galerie Guido Romero Pierini – Michael Timsit inaugurates an exhibition of contemporary art, awaited for many weeks!

« Ut Pictura Poesis » is a title beautifully found in homage to the Poetic Art of Horace.  This is an ancient collection in which there is a comparison between painting and poetry. In this paragone (debate during Italian renaissance), we find the idea that poetry is a talkative painting and that painting is a silent poetry. And it is exactly this subject that you will see during this exhibition with the three Artist: Marion Bataillard, Marius Pons de Vincent et Maximilien Pellet.

A majestic art exhibition in one of the most active quarters of the capital, 21 rue Chapon, an exceptional and atypical place in the heart of the Marais. This 130m2 space spread over two floors, includes a ground floor opening onto the street through a large display window. Inside, for the greatest pleasure of amateurs and neophytes is an exhibition of contemporary art which combines different artistic practices; an ode to joy, colors, and a love of aesthestic. 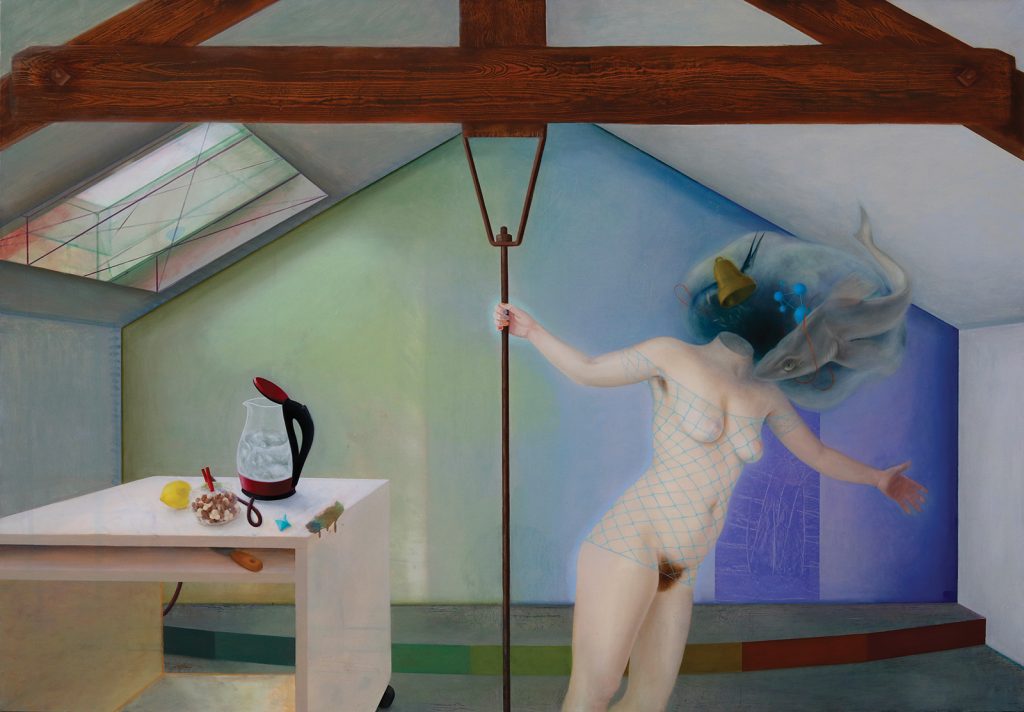 Marion Bataillard is not at her first exhibition at the Galerie Guido Romero Pierini – Michael Timsit. Her universe mixes spooky situations and tangy colors.

For this exhibition, the artist has chosen to exhibit Melancholia ou la Rate au Court-bouillon. She occupies a whole section of the right wall on the ground floor of the exhibition space. This masterful oil on canvas refers to the eponymous works of Albrecht Dürer and Lucas Cranach.

This is a dreamlike representation, one might say, not without a daily dimension. A headless, naked female figure is holding an iron bar in the right hand. She divides the composition into two parts.  Covered with a simple blue fishing net, the figure is as though she was captured in the middle of a dancing. You can see a shark, small fish, and molecules. On the other side, simply placed on a table are a kettle, a lemon, and a packet of sweets. On the edge, there are a few touches of paint. In this work, we say that the artist most certainly wanted to represent a dream.

Like a mise en abyme, Marion Bataillard much like to recall her status as a painter. When she represents herself, it is often as an artist.  However, the canvas, the paintbrush, and the paint tubes are enough to remind us that she is never really far away. This is discussed in the painting Peinture, also on display, where the artist proudly brandishes a canvas in front of the viewer’s eyes.

Her still lifes express her love for the representation of what surrounds us, of the smallest details of our daily lives. Games of light, hymn to life in this art exhibition in the heart of the Marais. 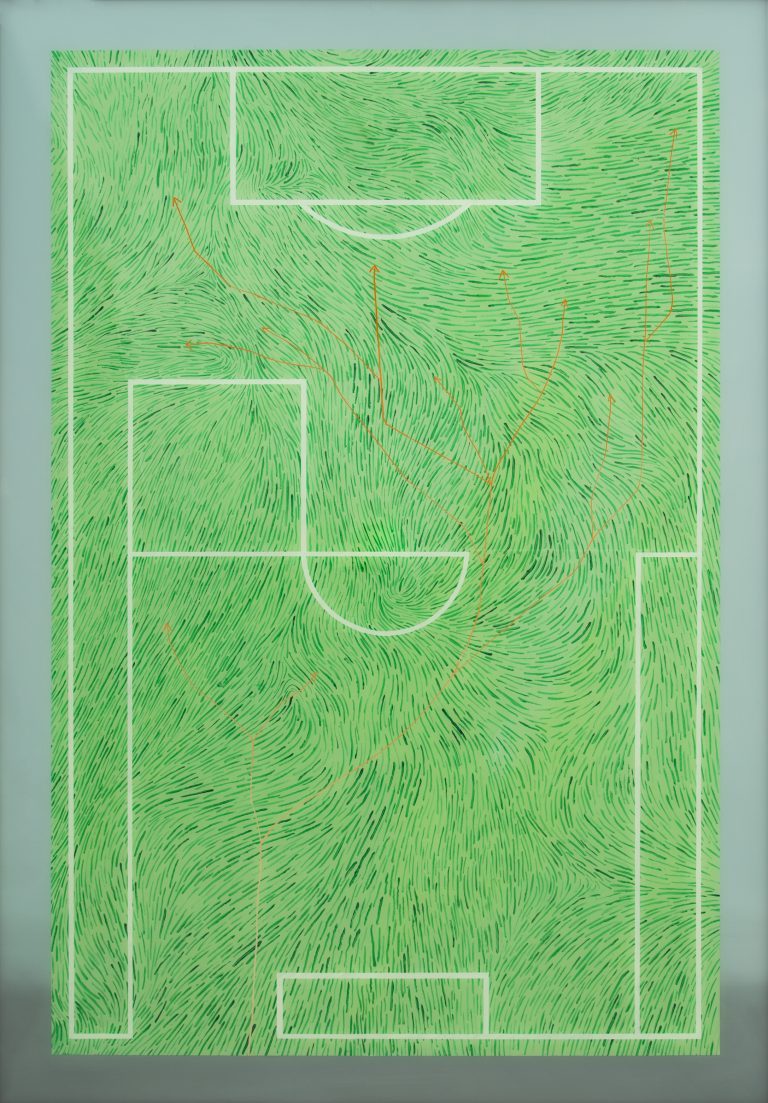 Marius Pons de vincent is one of those artists who mark the originality of the mediums used. He questions his status as a painter and the world in which he lives. For this, he introduces into his works a reflection of nature of the visible. We are talking about paintings of course. The artist works on and under glass, a rather rare technique.

For this exhibition, he essentially chooses to show works in which he claims his status. The glass used, is above all, that of his painter’s palettes. On this matter, he organizes the randomness and gives new life to objects. These graphic palettes are adorned with children’s names such as Louis, Suzon, Augustine, and more. These are the ones that revolve around the artist’s son. Thus, the object acquires a new dimension. It is on the border between sculpture, engraving, and painting.

One could be mistaken about his technique, as Marius masters it. We approach, we observe, and we gradually apprehend the interweaving of these different layers of paint under the glass. The palettes are different, the colors are shimmering, and yet so complementary. These small glass panels work both individually and as a whole.

The artist also paints on a rag, a technique that recalls his long hours spent in the workshop wiping the brushes. These pieces of material-soaked fabrics are part of the creative process, a corpus of tasks that he comes to enshrine, on which he tells another story.

This is part of an art exhibition in the heart of the Marais, where each artist magnifies the creative act in their own way. 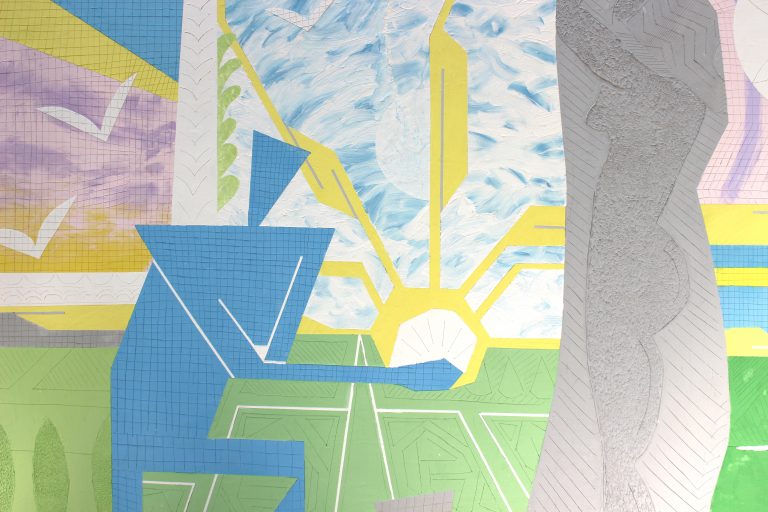 Maximilien Pellet’s work is a reflection on the evolution of styles, shapes, and patterns. The artist willingly leaves the easel aside. He uses ancestral techniques and revisits the history of art by weaving links between the eras. It is above all, the fresco technique that he summons in mosaics and sculpture. This is a mural that relies on very precise know-how.

Preparatory act, the artist traces light reliefs in the material to define the contours of the patterns. His work is done gradually, as you can feel the precision of his gestures. It is on these grounds that he applies his coating, made from colored pigments.

In front of Melancholia ou la rate au court-bouillon, his work reinforces the observation on the different pictorial practices. He continues this reflection in his watercolors on paper. They are all questions about form, one of the fundamental concepts of plastic expression.

This art exhibition in the heart of the Marais never ceases to arouse the curiosity of spectators!

At Alexandre Mazzia’s, newly promoted in the Michelin Guide